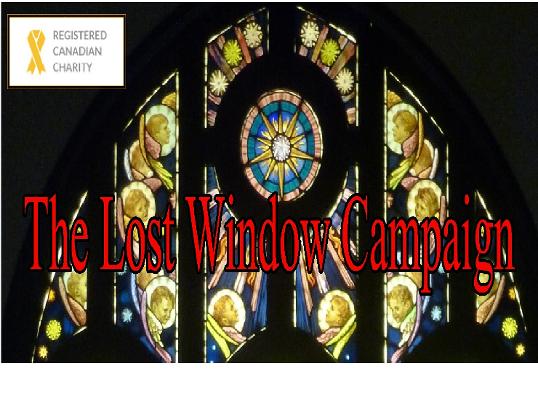 The Lost Window is a stunning stained glass three-panel work of art  that was created for the Eliza Merrington Chapel in Prescott, Ontario in the late 1920s/early 30s.

It is an original work signed by the immensely talented Italian-Canadian artist, Guido Nincheri. Nincheri came to Canada in 1914 from Italy and according to Ian Hodkinson, professor emeritus of art conservation at Queen's University in Kingston, ON, "he was the most prolific religious artist in North America having produced hundreds of frescoes and stained glass mostly in Quebec and Eastern Ontario."   He was cited by Pope Pius XI in 1933 as the church's greatest artist of religious themes. He was knighted by the Italian government in 1972 and in 2007 declared a “national historic person” by Parks Canada for his exceptional legacy.

Wow! And we, the citizens of a small town with an aging population of less than 5000 are lucky enough to have our very own Guido Nincheri! Our unique masterpiece was for many years deemed to be lost because curators of the Nincheri collection thought it was in the region of Prescott-Russell when in fact it was tucked away in our tiny neo-gothic Anglican chapel in the Town of Prescott. In 2013 the Anglican Church sold and severed the Eliza Merrington Chapel and the Nincheri window came very close to being sold along with it.  A concerned group of community members knew they had to act. They begged the diocese to lend them the money to move the window and although it was a very difficult decision, the general consensus within the small congregation was that the debt was worth it for the greater good of all.  The Lost Window was found AND saved and now, anyone who wants to see it is enthusiastically encouraged to do so anytime, free of charge.

Fundraising to cover the expense of saving the window has not ceased—the congregation and many others within the community are doing all they can to repay the costs and engage the community in the importance of such endeavours.